Google recognized that Epic might not accept its offer. 'As a potential alternative', a senior Google executive proposed that Google 'consider approaching Tencent,' a company that owns a minority stake in Epic, 'to either (a) buy Epic shares from Tencent to get more control over Epic', or '(b) join up with Tencent to buy 100% of Epic,'" the complaint said.

This information was produced during discovery, and Epic initially included it in an amended complaint back in July; however portions of it were subject to seal by the court. Tencent, one of the largest game developers and publishers in the world with stakes in countless companies, acquired a 40% stake in Epic back in 2012. Epic CEO Tim Sweeney maintains control of the company.
Zum Vergrößern anklicken....

Other now-unsealed portions of the complaint deal with new information surrounding Google's so-called "Project Hug," an initiative designed to sway top Android app makers and game developers not to leave the Play Store using kickbacks, commission reductions and other financial incentives. Google calculated that it risked losing up to $6 billion in revenue if more developers followed Epic in leaving the Play Store. So Google spent hundreds of millions of dollars on around 20 deals with top companies, including Activision Blizzard, to keep them from following in Fortnite's footsteps, the complaint detailed.
Zum Vergrößern anklicken....

Google schrieb:
To help support the specific needs of developers offering subscriptions, starting on January 1, 2022, we're decreasing the service fee for all subscriptions on Google Play from 30% to 15%, starting from day one.
Zum Vergrößern anklicken....

Ebooks and on-demand music streaming services, where content costs account for the majority of sales, will now be eligible for a service fee as low as 10%.
Zum Vergrößern anklicken.... 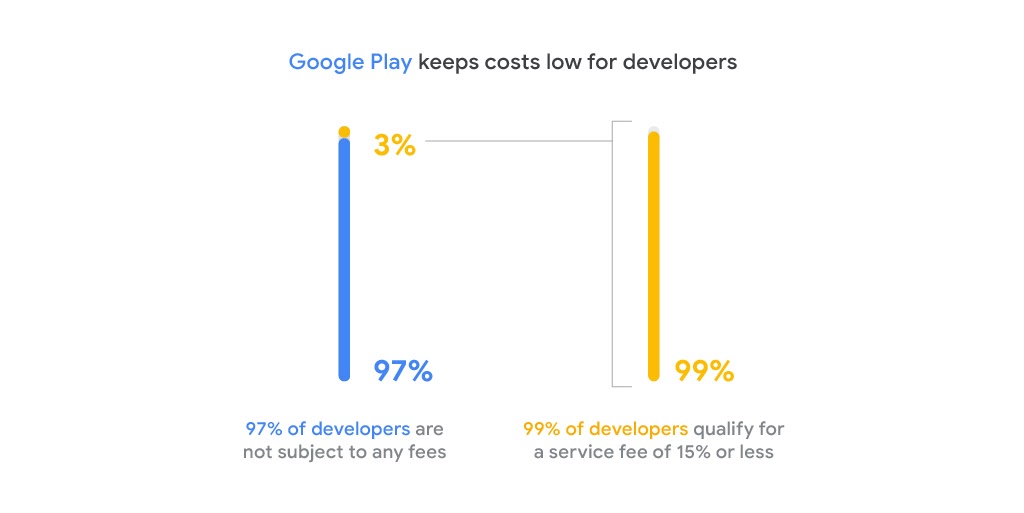 Posted by Sameer Samat, Vice President, Product Management When we started Android and Google Play more than a decade ago, we made a b...