Paul Tobin Goes on the Hunt with "The Witcher"
Daniel Glendening, Staff Writer

On March 19, "The Witcher" franchise will officially add comic books to its media franchise. Written by Paul Tobin -- no stranger to horror -- and featuring art by Joe Querio, the first chapter of a five-issue miniseries from Dark Horse Comics follows television and gaming adaptations of the original novels by Polish writer Andrzej Sapkowski.

Tobin's miniseries finds monster hunter Geralt traveling the Black Forest when a chance meeting with a widowed fisherman brings the semi-human protagonist to the mysterious House of Glass -- the writer's riff on a haunted, labyrinthine house. The series, which Tobin hopes will be just first of many outings with Geralt, is largely focused on character, exploring the line between the human and inhuman that Geralt represents.

Comic Book Resources spoke with Tobin about his plans for "The Witcher," Querio's spine-tingling artwork, haunted houses and finding the human in every beast.


CBR News: First off, what's the story you're telling in "The Witcher?"

Paul Tobin: We wanted a simple intro to the character, so we decided to focus entirely on Geralt. In our story he befriends who he at first believes is a simple hunter: a mountain man of sorts, but soon finds out that the man, Jakob, has a dead wife -- one who is still around, having been transformed into a bruxa, a vampire of sorts. Trying to escape this haunting, and needing a new life, Jakob accompanies Geralt on his travels, but they almost immediately become trapped in a strange house: the House of Glass. Other monsters abound, as well as clues to what is really happening. Between cemetery hags, leshen, a succubus, and a few other surprises, Geralt really has his hands full. That said, "The Witcher" stories, to me, are far more about character, so it's the nature of the people and monsters that Geralt is encountering that are the real story.

The "House of Glass" sounds like a take on a haunted house or labyrinth -- what is compelling about that trope, and how does one make it fresh again?

I find the tense atmosphere compelling. The feeling that there might be something right behind the door, anything behind the door -- and there are so many doors. The secret of our House of Glass is a main part of the story, as is the surrounding forest.

How much of a connection does your story have with the "Witcher" game franchise or the original novels?

We keep that focus entirely on Geralt for this story, staying away from the great wash of the politics in the "Witcher" world. He definitely is in that world, but we'd like that world to expand organically in the hopeful upcoming projects. It would have been too overwhelming to introduce the entire world at once to the new readers, so it's a foundation we're focused on, here.

What are the challenges, or, conversely, benefits, of writing within an already established world -- as in this project -- versus writing within a world of your own design?

Well, obviously there are boundaries that I can't break through, mostly having to do with consistency with the world in the novels and games, but both novelist Andrzej Sapkowski and game-makers ProjektRed have done a amazing job of having Geralt be a character in a world, rather than the far less satisfying "character with a world around them." When a character lives in a whole world, rather than just having a set of circumstances revolve around them, the toy box is so vast that there is plenty of breathing room for other stories. So, really, it hasn't been that much of a different experience for me, writing wise, than working on creator-owned material, and certainly no different than writing Spider-Man or the like.

What's your take on the lead protagonist, Geralt? What's driving him?

Witchers go through a process that basically strips them of a lot of their human emotions, but Geralt is different. The process didn't take. There's still a lot of humanity left within him. Despite that, he knows he's not human, not really, not anymore, and so he's aware that he doesn't really fit anywhere. He's unique. I think that grates on him, darkens his days. He can feel love, desire, pride, all that -- but he can't really grasp them. The things he wants are also visible to him, but somehow out of reach, nonetheless. So he just does what he can to make the world right: a few less monsters, human or otherwise. He's seen enough death that he understands the value of life, the value of one more drink of wine, one more smile from one more pretty girl, one less corpse on the battlefield -- or at least, one less of the wrong corpses on the battlefield. 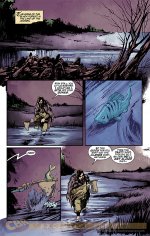 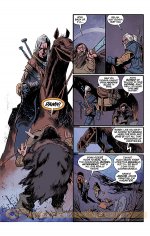 How would you describe Jakob and his relationship with Geralt? Does Geralt feel sympathy for his new companion?

I think Geralt sees Jakob as a friend and has sympathy for him, but at the same time Geralt feels reservations. Being who he is, Geralt always feels reservations. Witchers aren't generally trusted, but rather used as necessary tools, and that lack of trust has become a two-way street. Probably doesn't bother most witchers, but Geralt is our exception. He wants to trust, to believe in a friend, but -- well, he knows a bit too much about the world, too.

Geralt straddles a line between being human and inhuman -- are the monsters he hunts completely devoid of humanity? Where is that line where a person ceases being human and becomes a monster?

This, to me, is one of the fascinating aspects of Geralt's character, in that he doesn't make snap judgments of that type, not if he can help it. The general feel, for most people, is that a monster is a monster, and a human is a human, but Geralt believes that a monster is someone who acts like a monster, no matter what they might look like. Part of that is that he knows others see him as a monster, sometimes, as something alien and inhuman, but he believes (however grudgingly, at times) in himself. He knows he's not a monster, and is more open to "monsters" that behave as human. So, while Geralt is always willing to lop the head off a drowner, for instance, he's more apt to think first, and make a decision on the "humanity" of creatures like berserkers, werewolves, the stray succubus, and a few other supposed "monsters."

You're working with artist Joe Querio on the project -- what are you seeing him bring to the page?

Atmosphere. Atmosphere. Atmosphere. Joe's images perfectly control the mood. He depicts Geralt's world as a place with beauty, with desolation, with warmth, cold, the natural and the unnatural -- everything's there -- but there's also a pervasive sense of weight to his drawings: that moment when the forest goes quiet, when the back of your neck has a chill, and you know that something -- something -- is going to happen. 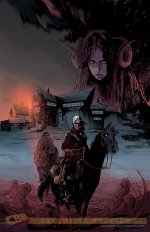 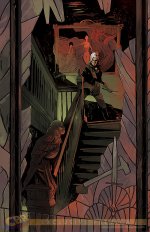 EXCLUSIVE: "The Witcher" #2 and #3 covers by Joe Querio

Quelle: Paul Tobin Goes on the Hunt with "The Witcher" - Comic Book Resources 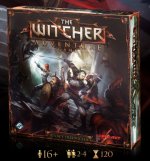 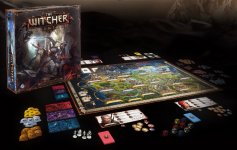 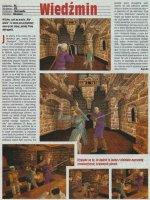