We promised more frequent updates, and we intend to keep that promise! In this update, you'll discover that the DOS editor is in a healthy shape, and might be among you sooner than you expect. You'll also learn at least 9 interesting things about Orc society, which happen to be important for a quest our fans designed during the fanday. And we give you a preview of the primary and secondary stats characters have in Divinity: Original Sin.

And they all come from one man! Meet Laurens, head of tools at Larian & bringer of good tidings.

The impact of Kickstarter: An example

For the first time in the history of Larian, we have people who are dedicated to making character development really fun. In the past, we always had the problem that we were spread too thin, and so the design and balancing of the character development systems were done almost between the soup and the potatoes. This may surprise you, but there are many many moving systems in an RPG and when you make them with a small team, you can't afford to have too much specialisation.

But now, thanks to your generous contributions, we can afford to have a team that is focussed on balancing our combat systems and tweaking the formulas that affect character development. It's a very big improvement

Part of the job of our shiny new "stats team" is playtesting and adjusting the rule set that drives things behind the scenes. You know, stuff like "will constitution affect some resistances?", "What about initiative, does stuff in your inventory affect it?" etc... But they also decide whether or not strength affects the initial opinion somebody has about the player's avatar. After many discussions, the team came up with the following set of primary and secondary stats. We also have a list of abilities, traits and talents that go with it, but we’ll leave those for another update, because we’re interested in hearing what properties you think should be associated with each of these stats.

A picture tells a thousand words, so here's that picture 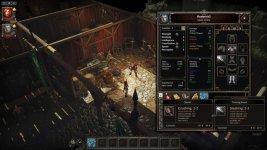 Let us know your thoughts! (Here's a bigger version)

10 Things I bet you didn't know about orcs 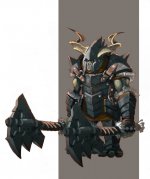 We just published the results of the grand political poll among gamers that was Divinity: Dragon Commander. Quite a lot of fun results in there, so you might want to have a look. We wanted to call the video the Big Divide, because it shows that people are as divided in the game as they are in real life.